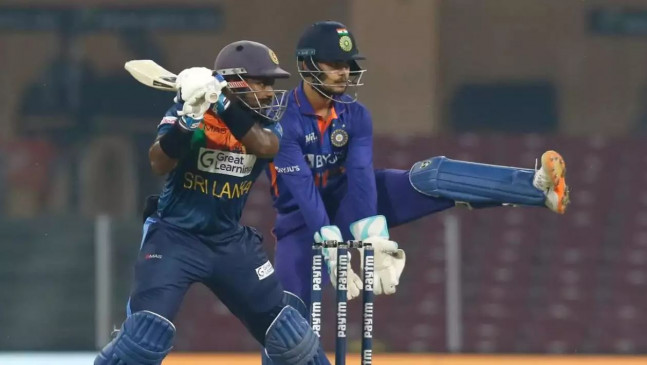 Digital Desk, Pune. Sri Lanka defeated India by 16 runs in the second match of the three T20 series played at the Maharashtra Cricket Stadium in Pune. With this, the three-match series has now reached a level of 1-1 and now the final and deciding match of the series will be played at the Saurashtra Cricket Association Stadium in Rajkot. Chasing the target of 207 runs, the Indian team had a very poor start and the team had lost 5 wickets for a total score of just 57 runs, in which Ishaan Kishan (2 runs), Shubman Gill (5 runs), Rahul Tripathi ( 5 runs), Hardik Pandya (12 runs) and Deepak Hooda (9 runs) wickets were included.

After this, Suryakumar Yadav and Akshar Patel took the lead for the sixth wicket and shared a 91-run partnership to bring the team back into the match, but in 15 overs, Dilshan Madushanka dismissed Suryakumar Yadav and brought Lanka back into the match. Although Akshar kept the front from one side and kept the team in the match by sharing a 41-run partnership with Shivam Mavi, who came to bat at number eight, but in the last over, captain Shanka dismissed Akshar Patel and dashed India’s hopes. . For India, Suryakumar Yadav scored 51 runs in 36 balls with the help of 3 sixes and as many fours, while Akshar Patel scored 65 runs in 31 balls with the help of 6 sixes and 3 fours. For Sri Lanka, Dilshan Madushanka, Kasoor Ranjitha and captain Dasun Shanka took two wickets each, while Chamika Karunaratne and Wanindu Hasaranga got one wicket each.

Earlier electing to bat after losing the toss, Sri Lanka got off to a great start where the opening pair of Pathum Nissanka and Kusal Mendis shared an 80-run partnership off 50 balls. Chahal got Kusal Mendis out LBW in the first blow to the team. He scored 52 runs in 31 balls with the help of 4 sixes and 3 fours. Apart from this, captain Dasun Shanka took the team’s score past 200 while playing a fiery innings in the last over. Shanka played a fiery half-century innings of 56 runs in 22 balls with the help of six sixes and two fours. Apart from this, Pathum Nissanka scored 33 and Charit Aslanka scored 37 runs. For India, Umran took three wickets, Akshar took two and Chahal took one wicket.